Added by Andrea Herzog-Kienast over 5 years ago. Updated over 3 years ago.

You upload a picture in FAL. You did'nt edit the meta data. But you will find the translation button(s) for the given languages (en, fr and so on). If you click the button "translate meta data", all other language buttons will be removed, except the translate (world) button. If you click the button again, all flag symbols will be shown again.
Now you can click at one of the symbols for a language or at the world symbol and you can translate.

But imho TRANSLATION needs a given language (Mathias, we talked about it some years ago).

Please note: the uploaded pic has no metadata at all.
So nothing can be translated.

The difference between en and fr may be the following:

en is used / fr is installed.

to clear things up:

Can you provide some more detail on the bug report taking these clarifications into account?

Yes, I know:
to edit metadata click the title
to translate metadata, click the World (toggle) Symbol and so on.

But if metadata in default language do not exist, the toggle icon should not be shown. As you said, you can't translate something which does not exist. :)

For the future it's fine for me to add metadata without translations. But until now we translate and only stuff which exists can be translated.

But now you can add metadata to an element if not metadata is given in default language. And this seems to be wrong for me in the actual concept.

In TYPO3 7 this is an UX thing. We are taaking about translation, think as an editor.

I hope this will make it a little bit clearer now.

What I meant with "translate what's there" was in regards to "words in a field".

I'm not sure if I really consider it good UX when some files have buttons while others don't.
In the end, "translations" work differently with files anyways.
Every file has a metadata record by default... it just does not contain values - unless you run an indexer that reads metadata from the file.

Technically the metadata in default is there.

See screen below for how it would look like 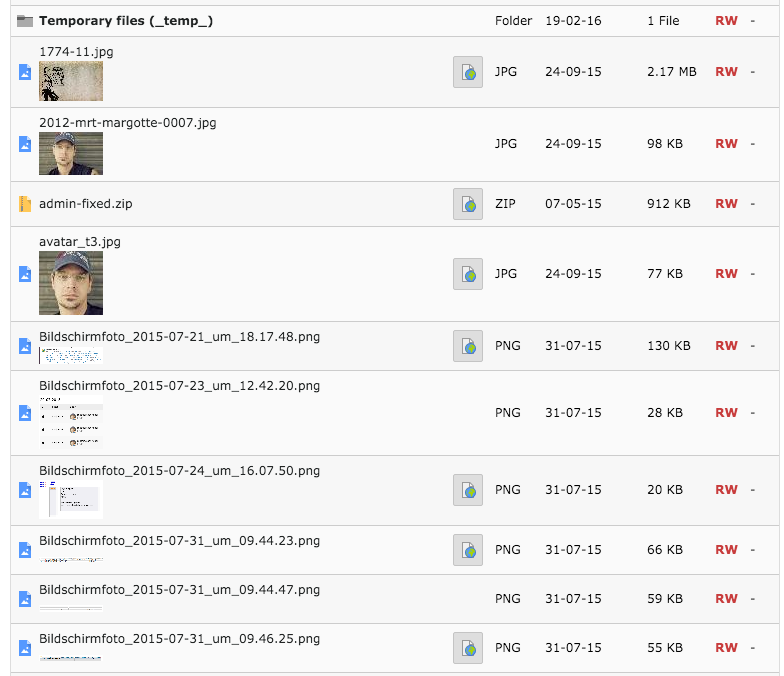 Argh, I know! Don't let's talk about things we discussed years ago. So please close this issue and let's discuss those stuff in person or at a sprint.

Closing the ticket won't help.
It will result in the same situation as we are in now.
People discuss things, do not write them down and two years down the road we discuss them again :)

So yes please.. let's discuss things but no, let's not close this ticket.

Ok, imagine:
From a devs point of view there will exist some metadata.
Form an editos point of view nothing is there if mo metadata is written by someone.
From an translation view - and let's talk about software - nothing can be translated if here is not default language!

Let me try to explain without any dev stuff:

You have a nice text:
you send the text ot a translator and what you will get back is the translated text.

You have a nice picture with empty meta data:
You send the picture to a translator and you will get back "???" - nothing.

Updated by Alexander Opitz over 5 years ago

does this issue still exist?

Yes, this issue still exists.
Ich can edit metadata in all languages, even if there is no text in metadata in default language.
So if you have an automatic process of Translation like Trados or any other translation software, the translator will get an empty file - so he will not be able to translate.

Updated by Riccardo De Contardi over 5 years ago

Updated by Benni Mack over 5 years ago

Updated by Coders.Care Extension Team over 3 years ago

Since we had some issues with meta data translations too the question that came up with our issues is:
Can we get visible metadata records using a page record of the type folder resulting in a pid other than 0, so we can translate them with the L10nmgr?

Here are some cents we can add to this topic:

First of all "translation" technically and from an editor's point of view means:

Best example for this use case are subtitles: An image containing a headline either in the default or the target language, which does not need a caption in that particular language but in any other language.
Usually professional translators don't get just single records for translation anyway, but the rest of the texts and images too to provide some context for the translation process.